In the past months we’ve been busy expanding FontArk’s characters support making it easy to create multilingual fonts with FontArk. Following are the main new features of this important version upgrade:

Watch this video to see how it works! 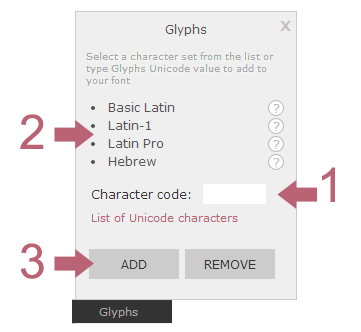 Up to this upgrade, FontArk supported only the Basic-Latin Unicode block of characters, 94 glyphs in total.
With this new feature you can now add Any Unicode character to your font by simply typing it’s Unicode value to the input field in the Glyphs dialog (1) and click Add (3).
The new Character will be added to the bottom glyphs preview. It will be blank, a watermark will display the character’s general form and it’ll have the same Matrix as the rest of the font’s characters.
In case you plan to add complex characters to your font, make sure you start your font with a proper Matrix (7×7) because the Matrix is fixed for the entire character set and can’t be changed during the design process. (The Matrix you start your font with is the one that will be used all the way).

In order to make it easy to add common Latin characters we’ve created two character blocks (in additional to the Basic-Latin block) to be added to your font in one-click.

Accented Latin characters are widely used in Latin scripts other than English. About 15 diacritics are used to accent most of the Latin characters.
The Latin A for example is accented in various languages more than 9 times, À Á Â Ã Ä Å Ā Ă Ą, add to it the lower-case a, and all the other accented Latin characters and you get a great deal time consuming repetitive work to do in order to complete a multilingual font. One of FontArk’s main philosophy rules are to use computing power to do all the repetitive work, and this one is a classic to automate!

Most of what you can and need to do in the accented glyphs (pale blue background) is to position the diacritics, for which we created two useful tools…

Notice…
– Some of the accented characters, for example Ø- Oslash, Ł- L with stroke, and others, don’t have a diacritic! we’ve placed in it’s glyphs the origin character (O, L) but you have to draw the slashes/strokes manually in these glyphs and as well as fix it’s position with any change to the character’s proportions.
– Some characters diacritic auto-position might not be “perfect”, so pay a careful attention to each and every glyph of the accented characters to find those that need manual adjustments.
– You can manually adjust the position of each and every diacritic by dragging the blue control point(Dragger) positioned in the center of the diacritic to the desired position, or type in the desired X,Y coordinates of the diacritic in the right panel’s Dragger-info inputs. (click on the dragger to make it selected/active (it’s color will turn from blue to red)). You can re-position this way one or more diacritics simultaneously, this tool is applied to all selected glyphs.

Two new UI layout buttons were added on the bottom right of the work area…
1. Change work area layout (1) – clicking on it will expand the work area vertically, clicking it again will shrink it back to fit the screen.
Notice that in the expanded mode the glyphs display is pushed down outside the screen, so you’ll have to scroll the window a little to view the glyphs and select characters.
2. Change glyphs preview layout (2) – Clicking on this button will expand downwards the bottom glyphs display, exposing the entire characters repertoire! Click again and it’ll go back to fit your screen.

This upgrade apprises the end of several bugs and dis-functioning in FontArk’s engine increasing FontArk smoothness and reliability.

FontArk’s most used templates has been improves and refined further more, as well as added diacritics for making it faster and easier for you to add the new Latin-1 and Latin-pro glyphs to your fonts and let you explore the new functionality of these new features.

It’s been a while since our last upgrade but we hope this important and massive new upgrade will worth the waiting as we’re constantly working on making FontArk the best tool for type designers and type enthusiasts out there.

Leave a reply Click here to cancel the reply

We're not around right now. But you can send us an email and we'll get back to you, asap.